Good for mind and body – the science behind yoga

Practiced by millions upon millions of people around the globe (including 36 million in the United States alone, on a regular basis), yoga is an activity that’s widely recognised to help both mind and body, especially in terms of keeping physical and mental health balanced.

Yet, while many in the Western world are aware yoga emerged from ‘the East’ and may well be beneficial for their overall wellbeing, many more don’t understand its origins and just how much it could help them. So, to address the first point, it’s on record that archaeologists have unearthed figurines in India dating back around 5,000 years in poses that reflect yoga postures. That maybe shouldn’t surprise anyone when they consider it’s believed yoga itself emerged as a practice about 2,500 years ago, via the Hindu-related Indus-Sarasvati civilization of Northern India.

Indeed, the branch of Vedic yoga that involves performing 12 different postures, the most recognised and practiced form of yoga around the world, is referred to as ‘the asanas’ – and involves postures including the ‘cobra’, ‘fish’, ‘locust’ and ‘plough’. While performing these postures, participants are encouraged to focus on deep-breathing patterns and attempt to be both present and mindful.

Now, of course, yoga has had – and still has – its detractors all over the globe, whom claim it’s a waste of time and does nothing for body, mind and soul. And yet, over the past few years, it’s emerged there’s something of a ‘science of yoga’, an appreciation by experts of what this ancient practice can indeed do for many people’s health and happiness – something that we, at Karma Foundation UK, wholeheartedly endorse.

What yoga can do for your health

For one thing, the deep-breathing advocated by this form of yoga is all about activating the vagus nerve (positioned at the top of the spinal chord) which, in turn, activates the vocal apparatus, as well as muscles for the head, eyes and heart and respiration and digestive organs. Therefore, this deep-breathing is conducive for the efficacy of several of the body’s major functions, including digestion and immunity.

Moreover, via a number of different slow-breathing yoga techniques, practitioners may find themselves contracting the throat’s glottis muscles, resulting in the effect of helping the heart’s ability to regulate blood pressure. It’s also believed by some that yoga may even help reduce blood pressure; therefore, leading to a reduction in inflammatory processes – immune responses connected to high blood pressure, diabetes and autoimmune disease. 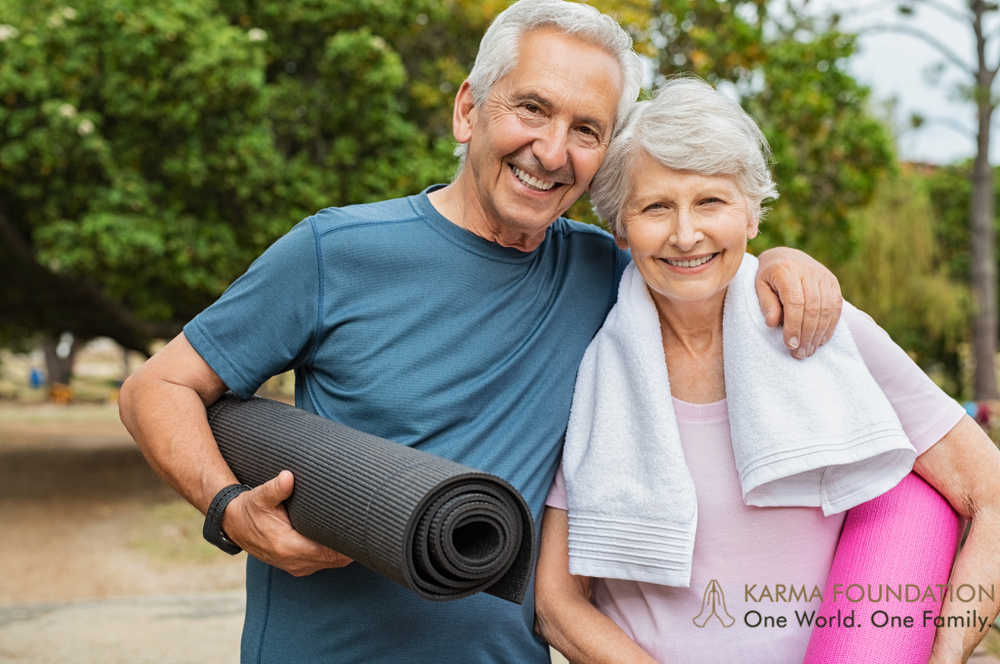 Yoga and happiness – the connection

So, bearing in mind these findings that practicing yoga postures may help the body’s physical health, it probably shouldn’t be at all surprising many adherents say it can also make them more content and happier. After all, physically speaking, that would follow thanks to yoga’s aforementioned positive effects on the vagus nerve and heart rate variability – one study suggests that people who enjoy such physical effects have a tendency to both more compassionate and kinder, which would likely make them happier individuals.

Additionally, it’s believed practicing yoga can change a person’s brain chemistry in a positive way. A specific study found a connection between yoga-practicing subjects and less grey matter reduction in the brain’s cortex – a part of the brain concerned with enabling the experience of positive emotions, including joy and happiness.

Plus, it appears yoga helps boost activity in the anterior cingulate cortex and the medial prefrontal cortex – two sections of the brain associated with empathy, gratitude and kindness. In short, practicing yoga can, indeed, make someone more empathetic and open to help others and make them happier people, in general.